The Conservation of Africa’s Rhinos

Marataba and Marakele National Park are home to a critically important, medium-sized population of white and black rhino, which, similarly to all other rhino populations on the continent, is under massive pressure from several threats. The most serious threat is the current onslaught of rhinoceros poaching for their horn. This has escalated since 2008 to the point where more than ten thousand white rhinos have been poached in South Africa alone over the past decade, forcing the rhino population into a serious decline.

Marataba, a 21,000-hectare (52,000-acre), privately managed section of the Marakele National Park, is uniquely situated where lush bushveld gives way to the Kalahari sands in South Africa’s Limpopo Province. As a contractual National Park, Marataba is one of South Africa’s most innovative conservation models. 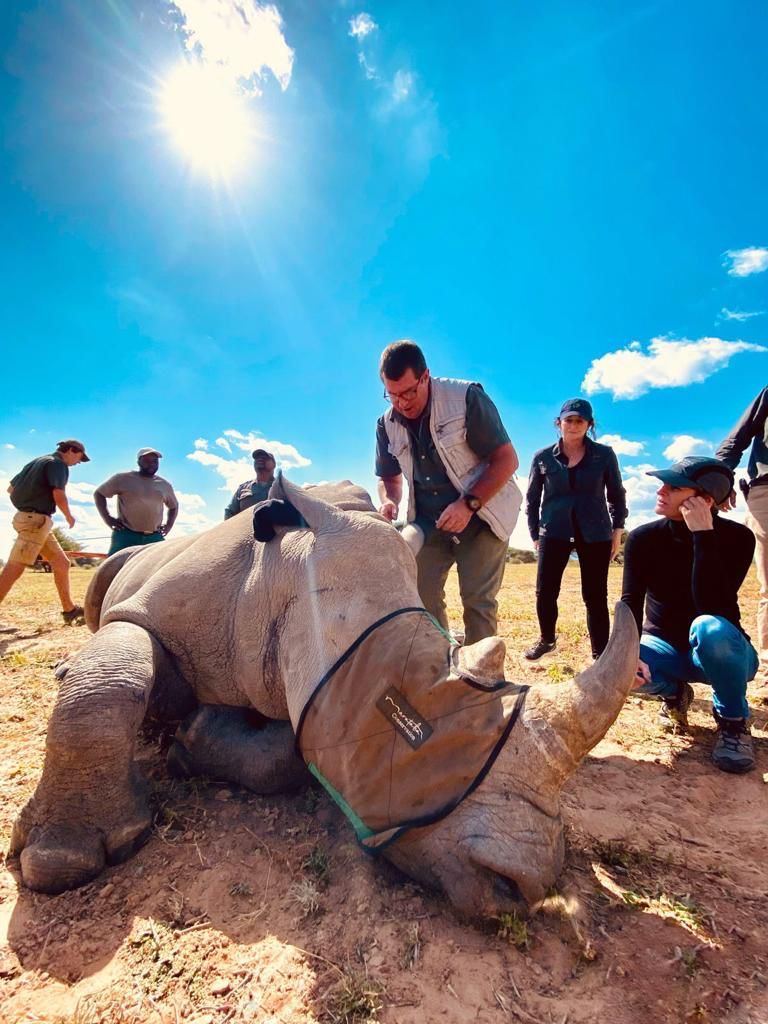 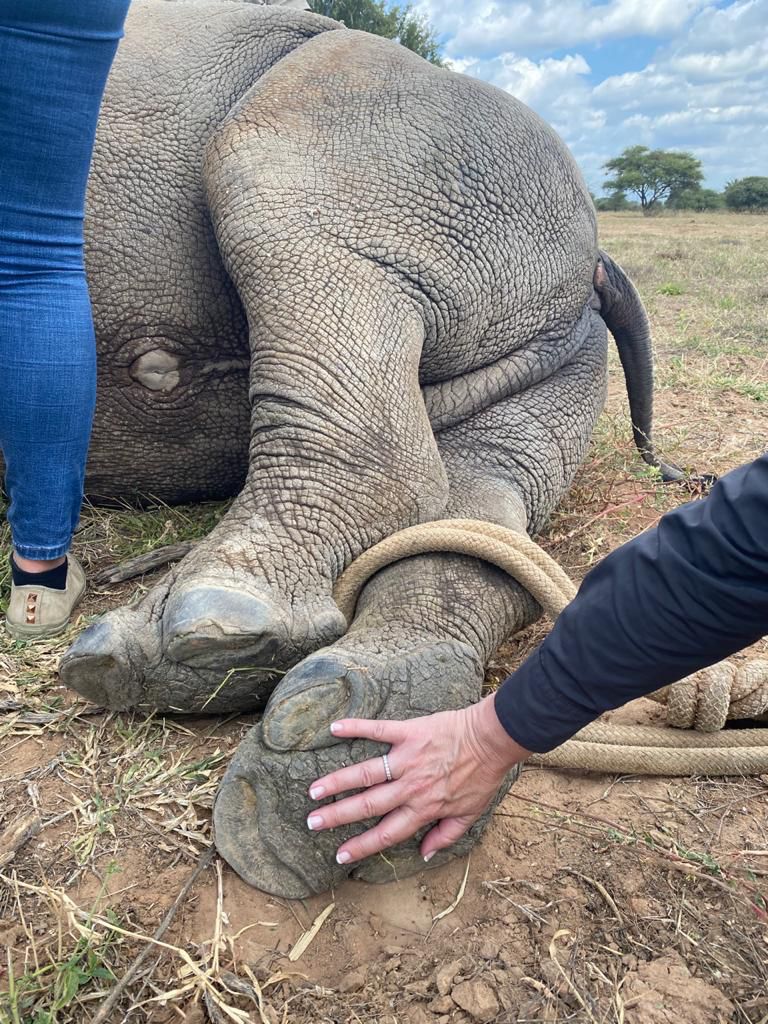 Bruce & I were recently given a wonderful opportunity to witness rhino conversation first-hand at the Marataba Conservation Camps, (Founders & Explorers). We took part in the capture, collaring and relocation of three young rhinos to a controlled area within the park, containing 3 hand-reared, orphaned rhinos.  By introducing the two groups of rhino, the hope is that this this will assist in rewilding the orphans. The team at Marataba, led by super-hero, Dr Andr Uys (Marataba Conservation Camps GM & Vet), will then closely monitor their interaction over the coming months.

After a full safety briefing on the dos and don’ts, we were taken to an area where a group of rhinos, (known as a crash), had just been spotted from the air. With the use of the helicopter and pilot’s skill, one rhino was separated from the others and then darted by Andr in the rear hind quarter. Despite the size of a rhino, not too much tranquiliser needs to be administered, only a similar amount to that used to dart an impala – who would have thought!

Once the dart has reached its target, the rhino will continue to run for around 6-8 minutes before stopping to lay down.  Andr will then signal the ground team, led by Naude, (Conservation Manager), to approach and stabilise the rhino. A blindfold is then wrapped around the rhino’s eyes and socks placed in their ears to prevent distress. Interesting fact- unlike antelope, rhino horns are not attached to the bone of the skull. 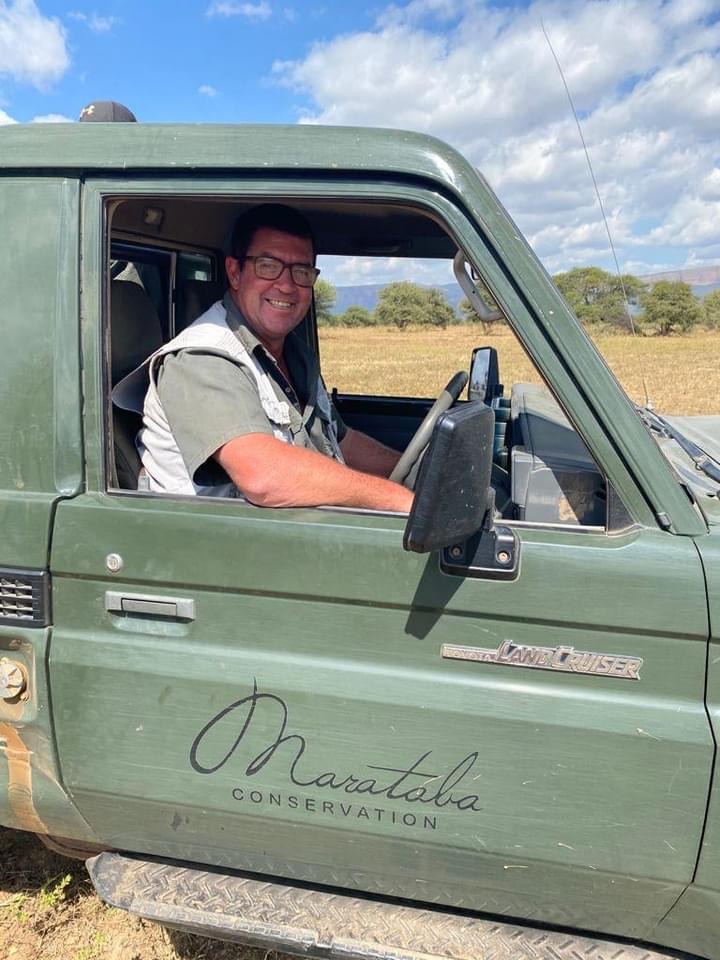 Only once the rhino was fully stabilised were we permitted to approach.  As time is of the essence everyone was moving really quickly, but there was no panic.  Under Andr

With each rhino, Dr Andr Uys will check if he/she has ear notches.  These enable researchers to correctly identify different individuals on the reserve.  Each rhino is given a unique ear notch number and then microchips are placed in the two horns and body for identification and security purposes.

A DNA sample is then taken and a leather ankle collar secured in place with nuts and bolts.

The ankle collars, (a new initiative), are solar powered and only need six days of sunshine per year to operate.  The collars are tracked by ‘towers’ that have been erected in the park and work on algorithms which monitor the rhinos’ habits and movements. All data is collected and monitored on Earth Ranger, a sophisticated management system, that will send alerts, (three different levels), if something out of the ordinary is picked up. The cost for just one collar is R 8,500. After waking this beautiful creature, it was guided into a large trailer and taken to the exclusion zone where it is set free and will hopefully find and befriend the orphaned rhino.

In the fight against rhino poaching, the entire area surrounding the Marakele National Park has been enabled with sophisticated license plate / vehicle recognition technology.  In addition to these cameras the farmers in the area are also very involved in anti-poaching community groups.

Due to their continued efforts, the Marakele appear to be winning the war on rhino, but this is only one small area. Dr Andre Uys and his team are busy sharing their knowledge in the hope of introducing this new initiative to other farms and parks.

With the number of rhinos being poached in South Africa increasing by 9,000 percent since 2007, I am not certain that we can win the war against rhino poaching, but after bearing witness to this incredible team and their efforts, I know that we will not go down without a fight!