Desert Rhino Camp offers a remote, exclusive and specialised accommodation and experience. Located in the vast Palmwag Concession, which is a semi-desert reserve of about 5,000km² between Etosha National Park and the Skeleton Coast, Desert Rhino Camp is the perfect Namibian destination.

The camp features 8 tents and accommodates up to 16 guests. Each uniquely built Meru-style tent is raised up on wooden decks, boasting a veranda where guests can relax in one of the directors' chairs. Luxurious double wooden doors lead into the tent, where the beds are made up with crisp, white linen. Behind the bed headboard are twin copper basins on top of a wooden cabinet, with a large mirror above that creates a screen between the bedroom and the bathroom area. The bathroom is finished with a shower and flushing toilet.

Move along the sandy pathways to the main area, which features a lounge, a dining area and a small bar tucked into a corner. The cosy open-plan main area is raised up on a low wooden deck, offering views of the nearby waterhole. The floodlights around the waterhole offer brilliant views of the mountains beyond as night falls. Outside, facing the waterhole, a few directors' chairs are set in a clearing where a fire is lit in the evening. Guests enjoy having their pre-dinner drinks at this spot while watching the sun descend behind the mountains. Around the corner, to escape the Namibian heat is a plunge pool set on a timber deck.

Desert Rhino Camp enhances their wildlife adventures with dedicated conservationists and local trackers for a unique game viewing experience. The morning and afternoon game drives centre around tracking rhinos although there are also healthy populations of antelope, and the predator population is the largest outside of the Etosha National Park with over 100 lion, cheetah, leopard, and brown and spotted hyena residents. Moreover, birding enthusiasts are sure to appreciate the prolific and diverse birdlife in the Palmwag area.

About the Palmwag Concession

The Palmwag Concession now holds the largest free-roaming population of the critically endangered black rhino in Africa and is one of very few places where rhino numbers are steadily increasing thanks to the vigilance, monitoring and conservation work of the Save the Rhino Trust. It is an exhilarating and unforgettable experience to approach the black rhinos on foot. 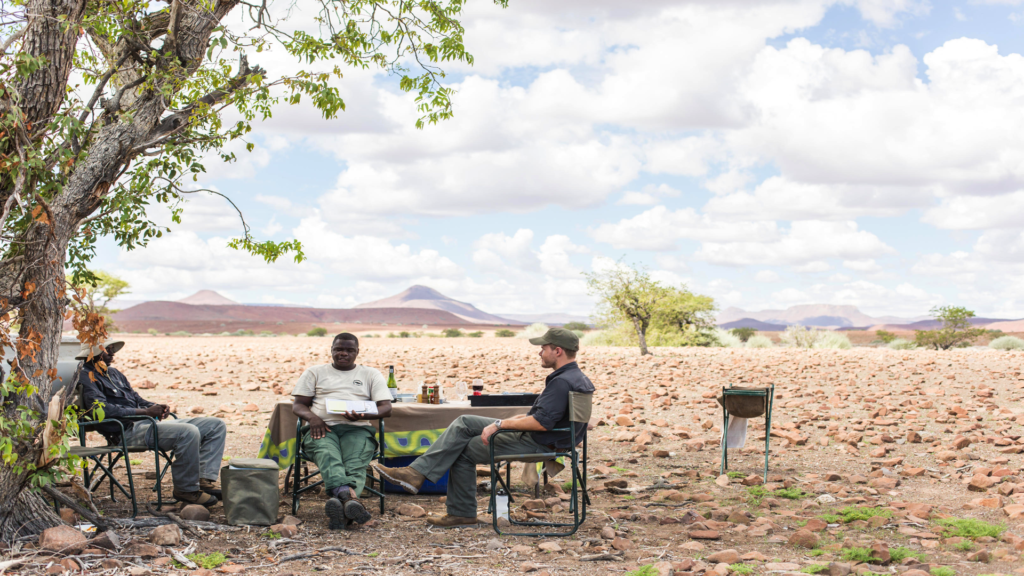 Your Perfect Africa © 2021 All rights reserved​