Elephant Rock Lodge boasts five luxurious two-sleeper chalets, including one family unit, each well-spaced for total privacy, with wonderful panoramic views of the waterhole and conservancy beyond. The chalets all have en-suite bathrooms with wonderful oval baths and picture windows. Each has a private veranda with two large swing chairs and great views of the waterhole or the indigenous bushveld.

Large indoor bar facility, indoor dining area, lounges with freestanding fireplace, and rock pool. Guests can enjoy the magnificent viewing deck; relax whilst viewing the many species of game and birdlife or just cool off in the pool. Delicious meals are prepared by the in-house chef and can be enjoyed in the open boma, under the stars on the viewing deck, or in the comfort of the main lodge.

The Lodge offers two game drives per day, accompanied by a trained game ranger. The lodge enjoys exclusive traversing over 10,000ha of the finest game viewing terrain in KwaZulu Natal.

In 2005, there was a proposal to build lodges within the reserve. This proposal was taken on and 3 more of the surrounding farms were added to the reserve. There are now a handful of luxury lodges in the reserve, some made from the old farmhouses on the land. In 2007 there was a claim for the land by the locals. The matter was settled and now the community is actively involved in the upkeep of the area.

The area around the game reserve was where the Anglo-Zulu and Anglo-Boer wars took place. Majority of the battlefields have been preserved and there are many monuments and graves to see. This makes for a good day trip as they are just around the corner. 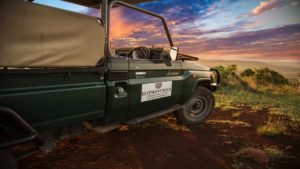 Additional activities are at an additional charge and are on request. It is recommended to book in advance.